Jurgen Klopp launched into a furious tirade about Liverpool’s fixture schedule after Pascal Gross’s controversial late penalty rescued a dramatic 1-1 draw for Brighton at the Amex Stadium on Saturday.

Klopp’s side took the lead through Diogo Jota’s second half strike after Brighton’s Neal Maupay had missed a penalty in the first half.

But Liverpool were stunned in stoppage time when Andrew Robertson’s challenge on Danny Welbeck was ruled a penalty after Stuart Attwell used VAR to overturn his initial decision.

Gross converted from the spot, leaving Klopp sarcastically applauding the officials at the end of a disappointing week for Liverpool after their shock Champions League defeat at home to Atalanta.

Liverpool captain Jordan Henderson claimed Welbeck told him it wasn’t a penalty, but Klopp would not take the bait when asked if he disagreed with the decision.

“You try to create again, on my cost, a headline, because that’s how it is. If I say now it was not… the ref whistled it,” Klopp said in a fractious exchange with a BT Sport interviewer.

“Don’t look like this, you try, always, all the time. Today I say it was a penalty, you are not happy with that answer, so keep your answers to yourself.”

Liverpool went back to the top of the table as a result of their draw, but the champions are just one point ahead of previous leaders Tottenham.

Tottenham would regain pole position if they avoid defeat at Chelsea on Sunday, while the Blues will go top if they win the London derby.

It was one of those days for Liverpool, who also saw goals correctly disallowed by VAR for offside against Mohamed Salah and Sadio Mane.

There was more bad news for injury-ravaged Liverpool as James Milner was forced off in the second half.

Milner’s injury provoked Klopp’s rant during his post-match interview as he repeated his recent complaints about Liverpool featuring in the early Saturday match after playing in the Champions League just three days earlier.

Asked if Milner had a hamstring problem, Klopp took aim at television schedulers and Sheffield United manager Chris Wilder, who has criticised his counterpart over his desire to allow five substitutions instead of the current three.

“Yeah, congratulations. You work for them yeah? Hamstring, surprise, and Brighton had injuries but ask Chris Wilder how we can avoid that,” Klopp said.

“I don’t know how often I have to say it, you picked the 1230, not you personally, but you did it, us on 1230, between now and December and New Year, one more Wednesday.

“I’ve not had a go at the broadcaster, I just say how it is. After Wednesday, Saturday 12.30 is really dangerous for the players.

“When we had a talk between managers, a week ago, it was 55, if not 60 (per cent) for five subs. Since then nothing happened.

“Chris Wilder or whoever says constantly that I am selfish. I think all the things that shows is that he’s selfish.

“I was in a similar situation when I worked at Mainz and it was all about staying in the league, but they (Sheffield United) have three subs and one point if I am right.”

It was a tough day for Klopp, who saw Aaron Connolly tripped by Neco Williams in the 20th minute.

Maupay stepped up to take the spot-kick, but his side-foot effort went wide despite Alisson Becker diving the wrong way.

In the 60th minute, Robertson found Salah and his pass teed up Jota to drill into the bottom corner from the edge of the area.

Liverpool were seconds away from three points when Robertson went to clear in his own area as Welbeck closed in.

Robertson’s foot made contact with Welbeck, but there were few appeals from Brighton before Attwell awarded a contentious penalty after consulting the pitchside monitor.

With Maupay off the pitch, Gross took this one and fired down the middle to salvage an unexpected point. 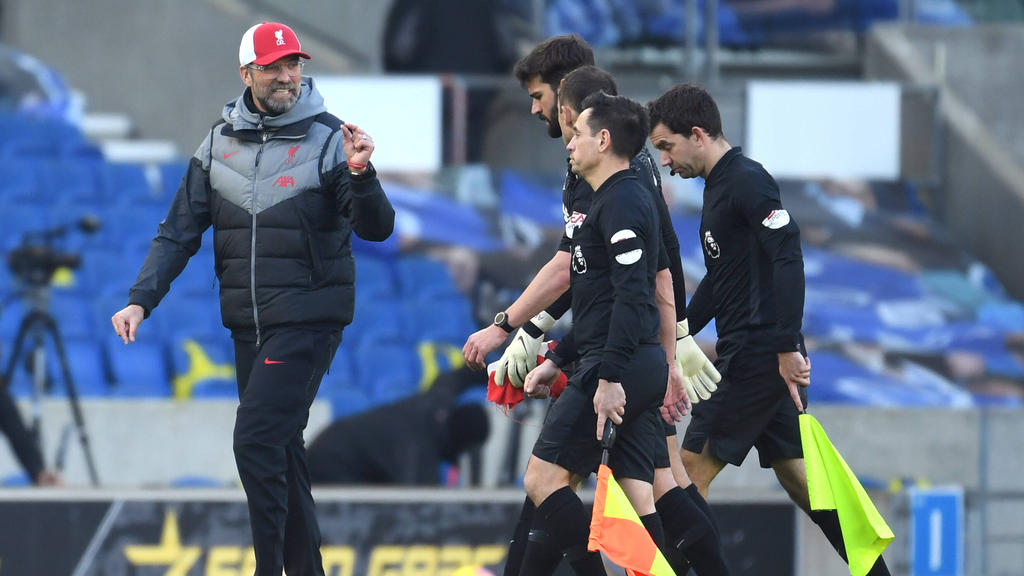 Liverpool’s top-four chance may have gone